Historical attractions in the city

There is not place in the Peru neither in America like this square that has survived,  serving from scenario to historical facts of monumental transcendency and tradition.

Through the centuries the enormous and beautiful Plaza de Armas of the Cusco is also known as Huacaypata that means "The Warrior's Square", according to some columnists its meaning but well it is: cry or groan. It counts the tradition that was traced by selfsame founder of the empire: Manco Cápac, who chose this place as symbolic center of the empire. There the Inca use to celebrate the Festivitie of the Sun or Inti Raymi. In this place also Francisco Pizarro the Cusco was founded.

With lapsing of the years, the Square of Huacaypata has been the core of different episodes of the history of the Peru, important facts like Túpac Amaru I execution , as well as of Túpac Amaru II, his wife Micaela Bastidas and his children. Around her several Inca built their imperial palaces: Pachakuteq, Túpac Yupanqui, Sinchi Roca and Wiraqocha.

Centuries later these temples were employees as residences for the Spaniards. The Temple of the Virgins of the Sun or Acllahuasi was built and the palace of Huayna Cápac.

Although renovations have been made, the Main Scuare, la Plaza de armas conserves colonial constructions on Incan bases, as churches, large houses and arcades and today it still continues being the main scenario of the social and cultural activities in Cusco.

Qoriqancha, the Temple of the Sun

It highlights the palace of  Qoriqancha among all the Inca palaces, this palace was surrounded of wealth unequality, enormous quantities of gold were used the moment of its construction and then they were plundered by the Spanish invaders in the time of the conquest.

On the remains of this fabulous Incan temple  was built Santo Domingo , the walls were used as foundations so that the Spaniards build Santo Domingo's temple.

The walls of the temple according to the columnists had in the junctures of their stones melted gold; they were had entirely, as tapestry for irons of gold.

In the Sanctuary of the Sun use to shine the disk of the sun made of solid gold, the sanctuary was formed of several chapels dedicated to the cult, among those that highlights the one mentioned Temple of the Sun, of the one which nowadays only it is a semicircular wall.

The mummified remains of the Incas stayed in this temple covered for jewels of gold.

Two temples dedicated to the Moon and Venus also existed, of similar distribution but with different motivations. The first one was good to gather the mummies of the Qollas or women of the Incas, and the second it served so the Inka witnessed the rites and sacrifices.

In other sections of the great temple of the sun were sectinos to worship to the Lightning, to the Thunder, to the Ray; while in the Room of Sacrifices used to serve to receive the offerings.

The union of the stones in the walls of which was the palace of the Inca Roca is so solid and perfect that doesn't allow to insert neither a needle among its unions. This is a famous historical attractiveness of the city, due to the much visited wall where it is the figured stone of the twelve angles, only in the world. The celebrated stone wall is part at the moment of the Museum of Religious Art. In the past it was the Palacio's headquarters Arzobispal.

Aqlla-Wasi The house of the "Chosen ones"

When visiting Santa Catalina's temple the walls of stone granite can be appreciated those walls formed the building in the time of the Inca where they were isolated the chosen ones or Aqllas of the sun, were young, beautiful women's stories and virgins that the subjected towns gave to the Inca as kind of a tribute.

These Aqllas were used to hide since they were very chil, they dedicated their lives to serve to different ends. Some were dedicated to complete works of faith, the cult of the sun, others to increase the sacred fire or to assist the Inca and noblemen. It is necessary to highlight that a strong prohibition existed, and it is that nobody could enter to this temple.

The union of the stones in the walls of which was the palace of Inca Roca are so solid and perfect  that doesn't allow to insert neither a needle among their unions. This is a famous historical attractiveness of the city, due to the very visited wall where is the figured stone of the twelve angles, unique in the world. The celebrated stone wall is part at the moment of the Museum of Religious Art. In the past it was the Arzobispal palace.

Built by the Inca Pachakutec it was located in front of the Plaza de Huacaypata (main Square) and it comprehends the current streets of Procuradores, Plateros, Tecsecocha, Saphy and Amargura; at the moment it corresponds to the area occupied by the Portal de Panes and neighboring houses.

In the part corresponding to the portals of the Main Square their solids and superb walls of figured stone can be admired.

It was palace of Inca Túpac Yupanqui; at the moment it corresponds to the area occupied by the Portal de Belén and neighboring constructions to the Triunfo Street.

It was palace of Sinchi Roca; at the moment it corresponds to the area occupied by the portal de harinas of the Plaza de Armas.

The Inca Wiraqocha established its residence in the Surtur Wasi, in what today is located the streets of Triunfo, Plaza del Almirante, Palacio and Plazoleta de las Nazarenas. In their place is located the Cathedral and the annexed churches of Jesus María and El Triunfo.

Residence of Manco Cápac, this located in the down part of the fortress of Sacsayhuamán. It is formed by stones cellular type, two of those which have 88 and 90 meters long. In the superior wall they highlight seven niches or windows. Before San Cristóbal's Church they stand out three called stones of the sacrifice. This real house was transformed into barn and in the conquest Paullo Inca and Sayri Tupaq.inhabited the place.

Important remains are still in this house that belonged to the Inca Huayna Cápac. This house embraced an extensive area that now is occupied by the Compañia de Jesús, the University Auditorium (Paraninfo Universitario) and the street Loreto until Pampa del Castillo. The main entrance was in front of the street Loreto.


Machu Pichu as a place for movies


City Tour: Sacsayhuaman will happen one million visitor by end of this year 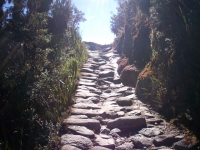 
Ollantaytambo: A Great place to visit