Paucartambo is located to 109 kilometers of the city of the Cusco, it is a typical and beautiful adobe and tile city, it is 2,830 m.a.s.l, it is famous for the festivity of the Carmen's Virgin for the temple of Paucartambo, and its beautiful bridge Carlos III, jewel of the built colonial architecture on the river Mapacho, for the king's disposition Carlos III of Spain in the year 1,775, it is built of lime and song, it presents an ogival arch for further resistance, its construction was carried out in dry deviating the river, this work lasted 5 years and it gave birth to the new Paucartambo of right architectural Spanish lines.

The Temple of Paucartambo presents a tower embedded to the ship of two waters, the cover is worked in stone with an arch of half point flanked by two pilasters that hold a chapel open with balustrades, in the interior they are appreciated: the biggest altar, wooden pulpit with salomonic little colmuns, paintings of the popes, the Virgin and San José, Sacred Domingo, as well as the worshipped image of the Virgin of Paucartambo, but well-known as the "Mamacha Carmen", employer and mayoress of the County, crowned by the Pope Juan Pablo II in recognition to the deep faith of the town of Paucartambo.

Festivity of the Carmen's Virgin

The entrance of this splendid festivity starts on July 15, the beginning is given with the explosion of a rocket, the same one that is answered by firecrackers and chiming of bells, the interpretation of reveilles in charge of the musical bands; subsequently it is made the entrance of processions and the "cera apaycuy", the night is opportune to begin the "qonoy" or bonfire, where the Q'olqas, the Chunchus and the Maqtas shows the purgatory, making boast of its rogueries, careers and acrobatic jumps.

Starting from the 22:00 hours the Prioste with their band of musicians and processions give the serenade to the Virgin, interpreting the "punchauniykipi", until the morning of the 16th day that it is the central day of this beautiful festivity that is visited by their faithful ones that arrive of diverse parts of the Peru and of the world, the Mamacha Carmen summons true human masses of parishioners. The central day it begins at 5 in the morning of the day July 16th with a Mass of Dawn and at 10 in the morning the prospective party mass where beautiful songs of the Qollas and the black, concluded Qhapac stand out the party mass, the processions dance in streets and squares; under the authority of the Prioste is the "forest" where the Qollas from a balcony throws dolls and furniture in miniature. Arrived the noon in the house of the "Prioste"; then is distributed the "eleven", among the founders, dancers and musicians of all the processions.

The great procession of the Carmen's virgin begins at 3 o'clock and in the roofs and balconies, the saq'ras waits to the "mamacha", making besides hiding. July 17th is the day of the "Blessing and guerrilla", after the mass and blessing, the processions go to the cemetery in pasacalle to visit the dancers died amid songs and memories. After it the great caravan visits the jail to offer moments of rejoicing to those cloistered. In the afternoon is carried out the second procession traveling the tract of the bridge Carlos III, in this place the Virgin imparts her blessing at the four his. Concluded the procession the population goes to the square to attend the traditional guerrilla among those "Qollas" and those "Antis", in this occasion they also participate those "Saqras" and "Wakas wakas", later the assistants participate in a "Qhaswa" or widespread party.

On July 18th the Virgin is placed in the bautism place of the temple to whose foot is the traditional “ocarikuy" that consists in the representation of children and adolescents to be blessed by the priest. At 4 in the afternoon the celebrations culminates with a blessing from the Virgin to the population.


A small experience into Cusco, the legendary inca city


Amaru Kancha: The archaeological remains nearby to Cusco Main Square 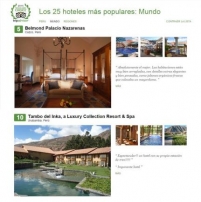